I woke up needing to use the toilet. Rubbing my eyes and blinking furiously, I tried to focus my vision. “Damn, I need more sleep” I remember thinking as I crawled back into bed. I was living in Berlin at the time but had returned to Dresden for the weekend. The night before, we had celebrated my partner’s birthday and when I woke with my vision blurred and reaping the early signs of a hangover, I was sure I just needed more sleep. It wasn’t until we got up a few hours later and sat down for breakfast that I said to Anna

“I think there’s something wrong. I can’t see.”

We made our way to the hospital and optimistically asked to see an ophthalmologist (eye doctor). It makes me laugh a little to think back at how blissfully unaware I was that my life was about to change. It didn’t take long for them to transfer me to the neurology department where I was then sent to have an MRI followed closely by a lumbar puncture. Three attempts at a lumbar puncture to be accurate. I spent 5 days in hospital and underwent a range of tests. From the outset, the doctor had been very open with me about what they thought it could be and within a couple of days, after ruling out other potential causes such as HIV, I was diagnosed with Relapsing Remitting Multiple Sclerosis.

At first, I didn’t have a strong reaction. I’m not sure if it was denial or if I just didn’t grasp the seriousness of what I was being told. It took me two more days before I even told my parents (sorry mum!). All I knew in that moment was that this hospital visit was costing thousands of euros by the day and I still had no idea if my travel insurance was going to cover it. I was emailing them daily and trying to get them the right information from the hospital. Anna was also in contact with them, doing all the translations not just between them and the hospital but also between me and the hospital staff. I truly don’t know how I would’ve handled it if I was on my own. It was a stressful confusing time and it didn’t help that my German was not up to scratch; a point the nurse loved to tease me about!

It wasn’t until we returned home that I think it finally hit me. We went for a walk down to the river but it wasn’t long before I had to head home. I was weak. Trying to process everything, I went to write down my thoughts but I could barely grip the pen. My great auntie had MS and she died when I was young. It was the first funeral I remember going to and that was all I knew about her. Someone on ‘Shortland Street’ had it and she went from crutches to a wheelchair real quick. That was my understanding of MS. And there I was, weak from a 5 minute walk. My vision was still blurry and now I could barely use a pen. I stubbornly proceeded to scribble my thoughts down as my eyes started to water.

After much deliberation with the insurance company, I ended up returning to Aotearoa in August 2017, five months after my diagnosis. I’ve been lucky enough to live relatively unaffected by any MS symptoms for the majority of the time since returning; a reality that seemed impossible when I was laid up in that hospital bed in Germany. It wasn’t until October last year that I suffered my second relapse. What begun as a tingling in my foot, ended with a loss of feeling down the right side of my body. It took about a month before I regained feeling but I am thankful to say I did bounce back to 100%. Although it was a scary reminder that I still live with an unpredictable condition, it was also the disease progression I needed to show in order to qualify for Disease Modifying Therapy (DMT). It felt counter-intuitive to have to wait for things to get worse before I could start on preventative treatment (just ponder that idea for a second). We know early detection alongside early treatment presents the best odds of limiting disease progression. Unfortunately, pharmaceutical companies don’t give these out for free so it is left to organisations like MSNZ to advocate for this. I am grateful for their mahi.

I recently found the note that I wrote in 2017, when I could barely grip the pen. It’s quite hard to read and that’s not just because it looks like it was scribbled by a child (and it most definitely does). It’s hard to read because I sound so lost, so defeated. My thoughts were scattered; the musings of someone adapting to a new reality they didn’t yet understand. “It’s only a matter of time.” That statement appears 3 times and not once in a positive manner. I felt like my life was mapped out and there was nothing I could do about it. “It’s only a matter of time until I’m in a wheelchair.”

It’s been four and a half years since I was diagnosed. I was 24 years old. I felt robbed of my youth, betrayed by my body. I’m now 29 and looking back on it all; I can see it in a different light. I recently reached out to Anna to ask her what she remembered about this time and although this might be out of the context she meant it in, she said something that I think is really beautiful. “Time has the weirdest magic to it.” In the time since my diagnosis, I have learnt so much about myself. I’ve learnt so much about what I really value in life and how I want to prioritise my time. I’ve learnt how to listen to my body and truly understand what it needs. I’ve learnt what MS actually is. How varied it is, person to person. If you take a minute to read some more of the inspiring stories featured, you will get a taste of the type of amazing people I’ve been lucky to meet along the way.

I wouldn’t say I’m glad I’ve got MS. But if you asked me to give it and everything it’s taught me up, I’m not sure I would.

24 year old Blake would have never believed that. It was all wheelchairs and disability that I read about. I didn’t see anything about the hope and inspiration that I feel today. I guess in some way, it really was “Only a matter of time.”

PS For those wondering, my travel insurance did cover my medical costs. Thank the lord for that because the amount resembled a small house deposit. Well, maybe not in this market… but ah.. you get the point. 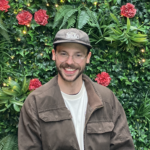