I had always been a dairy farmer and a hard worker. My wife Cindy and I, plus three kids moved from the North Island in 2008 to the West Coast after purchasing a small lifestyle block. We also had a rental property in the North Island which was going to be our retirement fund. Everything was great for us, we felt lucky and blessed.

It was January 2010, a beautiful summers day on the West Coast, where my family and I had spent the day with friends on the jet boat having fun on the Buller River. After getting home, I remember feeling weird down the right side of my body and collapsing. I guess that was the day my life changed.

The following day I was wiping (or trying to) the dining room table and I turned to Cindy and said “this is weird. I want my arm to move to wipe the table but it’s not working”. Cindy had known someone, years before we met, who had MS and it all seemed a little bit familiar to her. The following month, our fears were confirmed with test results and MRI’s. I was 32.

The next few days were a bit of a blur with lots of confusion, uncertainty and grief all thrown in. Cindy and I agreed that we were grateful it wasn’t anything worse and there are always others out there worse off than us. After a lot of tears we decided to work as hard as we could, for as long as my body would let me, and pay off as much of our mortgages as possible. I only lasted one year before the fatigue and symptoms got worse. Then, in February 2011, we were thrown a bit of a curve ball. Cindy unexpectedly fell pregnant and we had bigger decisions to make. We decided to sell the rental and move to our block of land. However, it wasn’t quite that simple, as it took another two years to sell and a loss of $80k. In November 2011 our beautiful girl was born, only to be later diagnosed with a rare genetic chromosome deletion. She is autistic, with a few other health issues thrown in the mix.

I was on Betaferon for a year before I started relapsing every three months. Then, I was then put on Copaxone, which didn’t stop the relapsing.

I have been on Gilenya now for three years and haven’t lost the use of my legs since. My body still had its limitations but I knew I wanted to give something back and, I guess, I wanted to prove something to myself at the same time. So I said to myself, “Why not run the Buller Half Marathon and raise money for MS West Coast?” So I did. Training was slow and steady, but in February 2018 I successfully completed the Buller Half Marathon and raised over $3k for MS West Coast.

I am a very proud father of four amazing children and a grandad to two beautiful grandkids. They are my inspiration and I want them to see that anything in life is achievable, no matter what.

I now know my body’s limitations and my goal is to be able to accomplish one task each day, taking one day at a time.

Yes, my life is more different now than I ever would have imagined, but, I wouldn’t change a thing. Some days are hard and long, but I think the secret is to just get on with it.

Life isn’t about being rich or having lots of ‘stuff’. Its realising your worth within yourself and staying humble. 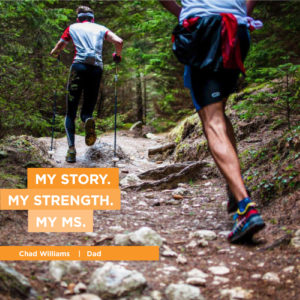