In this article, Dr. Huhana Hickey, who is a Māori lawyer and disability advocate, shares with us her personal story of struggle and eventual diagnosis of MS. She shows us how she is her own biggest advocate and hopes that in sharing her story it helps others to advocate for themselves and get the help and support required.

Kia Ora Koutou, my name is Dr Huhana Hickey, Dr Hu for short, mainly as I am a big whovian fan (Dr Who sci fi fan) and I tell people, the only reason I did my PhD was so I could be called Dr Hu. It’s because I was told I would never amount to much and I wanted to prove to myself I could achieve something.

I was born prematurely and adopted out three days after I was born, there is a story behind that which is far too complex for this piece, but, needless to say it put me on a path that leads me to where I am today. I was raised by a lovely couple, the typical working-class family who held values I both admired and simultaneously struggled to live by. As a child, I was exposed to dioxin as it was often sprayed over farms in Taranaki and until 1965 it was a common aerial spray that Ivan Watkins Dow in New Plymouth manufactured. It is the same chemical that was known also as agent orange used in the Vietnam war. My adoptive mum worked in the café at the factory, my nana lived down the road from it and we use to swim in the ocean which the factory overlooked. We don’t know how I acquired my MS, we do know I had a lot of lung and pain issues as a child where I also struggled with fatigue etc, always dismissed as not real and despite being active such as tramping, running and playing netball it never did dissipate the pain in anyway.

I had two gorgeous sons and had a career in a range of areas, including nursing, farm hand, retail, but it was when I was in my second year of nursing training at the local polytechnic that I had extreme pain the doctors couldn’t understand. I felt them as gut pain or pelvic pain, so they did a range of exploratory tests we got nowhere with a diagnosis. I wasn’t allowed to continue nursing, so I went to university and despite everyone not holding out hopes as I had dropped out of high school, I entered my first year with three A’s and two B’s. I achieved these grades while having also had 8 surgeries, one a hysterectomy and all while raising a disabled son. I realised then it was possible that I wasn’t as dumb as people told me I was and I carried on to complete a Bachelor of Laws, a Bachelor of Social Science, a Masters in Laws with distinction and a PhD in Law and Tikanga Maori. I did it, this high school dropout got to do something worthwhile.

However, in all of this, my diagnosis remained elusive, the neurologists in the Waikato refused to consider MS and thought it was a psychiatric condition, despite symptoms showing otherwise, they kept saying that Maori don’t get MS, and so I was refused treatment. Rolling forward and I had moved to Auckland to be the inaugural solicitor for Auckland Disability Law. In 2010, I had a minor car accident and it was having treatment for this and after an MRI which had been refused for eleven years, I was given a tentative diagnosis of MS. After a complaint to the head of neurology, I was moved to Jenifer Pereira who has been my neurologist since which I am glad about although not having a neurologist at the CMDHB means I still get male neurologists when hospitalised for flare ups where they continue to refuse to treat me.

I still present as a conundrum to the doctors, as my cognitive skills are good, but it’s the flare ups, and the more recent MRI’s increasingly proving my critics wrong. The pain has eased with legal medicinal cannabis but the cost and the difficulties of getting regular work have made it hard to maintain lately, the increasing flare ups are causing some longer-term damage each time and the future is as yet, unmapped. Despite being Maori, my MS is not only my experience in my biological whanau. I have an uncle on my Maori birth mothers’ side who has MS and a niece who has the worst case of someone so young in Australia where she is living with a very aggressive form of MS.

Part of my work in human rights law has been based on my own life experiences of discrimination, abuse and just a complete lack of inclusion in society. I no longer advocate as the fatigue and pain is now too great for me to be able to sustain that type of work, but I do work hard when I get it in both paid and voluntary roles to keep trying to make a difference while I can as there is so much need out there. My voice is one I lend towards trying to improve the quality of life for those who struggle for it. I know medicinal cannabis works for some because I have used it and still do use it, both Sativex and Tilray, but it’s come at a cost. It is not cheap, and I have paid a price fighting for access to it. I do hope NZ soon gets real and provides a way forward in legalising and bringing in affordable medicinal cannabis. MS is not an easy condition to live with, my own journey in the beginning was one of depression, exhaustion and pain. Over the years, it hasn’t become easier, but I have found ways of managing better. I meditate, I use medicinal cannabis when I can afford it, and I work hard to change my thinking from the negative to a more positive outlook. I have two wonderful sons and two great grandsons, along with more mokos through our nieces and nephews, they fill my life, a child has a way of shifting one’s mood around. My remaining frustration is the reluctance by the profession to treat me and the sense there are many more out there who remain undiagnosed or lacking adequate treatment options, my hope is that in time and as knowledge grows, there will come more solutions for those in the future who are diagnosed. My hope is, the work myself and others do lead to better outcomes for us all. 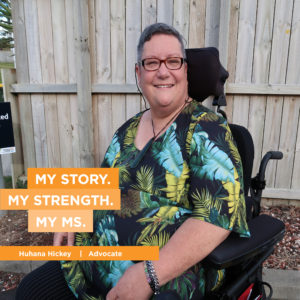