I am very thankful to have my official diagnosis as I always knew I had MS.

My name is Selena, I was officially diagnosed with Relapsing Remitting MS at 40, but my symptoms started when I was 37.

In 2019 I was studying to be an Early Childhood teacher, I was on my last teaching placement when shingles appeared.  One month later I had blurry and double vision. Two days later I was numb from the waist down, I remember I was folding towels and the towel brushed my foot it was a very uneasy feeling.

I saw an optometrist who referred me to an ophthalmologist, from there I was referred for an urgent MRI. The MRI showed multiple lesions and then came the lumbar puncture that showed oligoclonal banding.

I was then admitted to hospital on steroid treatment and then again, a month later. I then had another MRI that showed my lesions had decreased. I didn’t tick the boxes for MS at that stage which was very frustrating at the time.

Then this year I had a numb thumb and finger on my left hand along with fatigue. I saw a doctor who referred me to a Neurologist. I had another MRI that showed new lesions and I had my diagnosis of MS.

I am very thankful to have my official diagnosis as I always knew I had MS. I’m now on medication Ocrevus which is twice a year infusion.

I have two amazing boys and husband that I very appreciative of. They help keep me strong and very helpful when my symptoms are hard.

The MS Facebook groups are also a great tool for me I’ve learned so much and appreciate the chats. I am very grateful to East Otago Health, Dunedin hospital wonderful nurses and MS Otago. 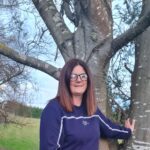