“Normal? I hate that word. I mean REALLY hate it. What does it mean? My life stopped being normal on the 23rd of December 2007. That was the day the neurologist told me I hadn’t had a mini stroke…awesome! No, I had lesions on my brain, so he thought I might have MS. I don’t remember hearing anything he said after that. In the 12 years since, I’ve never gone to a neurology appointment alone again, just in case I miss hearing something important.

In early 2008, I had a battery of tests, but while they ruled out everything else, they couldn’t confirm MS because I didn’t tick enough boxes. I did, and still do think this is ridiculous. I had yearly check-ups for the condition that I didn’t officially have for the next two years, and strongly believe that would still be the case now if I hadn’t met a guy.

We met online, he lived in Cambridge, I lived in Dunedin, and was looking for a reason to move. Six months in, we booked the ferry, and nine months after we met, I left (March 2010). 1333km and 4 days later, I arrived in Cambridge having driven my tiny wee Charade the whole way. While I found the drive tiring, I also loved that I’d had the opportunity to do it. Before I met him, I’d never been north of Wellington.

Sometime after the move, I noticed I had spots in my vision. A little like the aura I get from a migraine, but slightly different. They made it awkward to read and when they didn’t go away, I figured I was probably having a relapse. So it was a rush to get signed up to a doctor, get my medical records sent up, and get a neurology referral. By the time it happened, my vision had come right, but it was enough to convince my neuro to do another MRI, and a lumbar puncture, an experience I would rather not have again.

So, the MRI and lumbar puncture confirmed what we all suspected, and much to my surprise, I went through the grieving process again. I now believe that I’d convinced myself I’d never be officially diagnosed, so it took its toll on me. The neurologist applied for funding for medication from Pharmac, which was granted, and I’m still on it nine years later. I had an MRI recently due to a few episodes of vertigo earlier in the year. They wanted to check if it was related, and I’m pleased (and annoyed) that there are no new lesions. Annoyed, because after nine years, I still dread my weekly injections!

Since I came back to Dunedin in June 2011, I ended up working for my sister as her nanny, helping to bring up two gorgeous girls. I also met a wonderful man and got married three years ago. I’ve learned to knit, become involved with my local MS Society (MS Otago), volunteer at the Salvation Army, fostered 8 cats for Cat Rescue Dunedin, bought a house and I’ve started running. I’ve lost 10kgs and given up my afternoon naps which has increased my energy levels to my utter surprise. I think I’ve finally found that happy medium I’ve been looking for, for 12 years. But I still suffer from more fatigue than the average Joe.

And having MS? Despite everything, I wouldn’t change it. Well, no more injections would be nice. I stopped surviving and started living. If it wasn’t for MS I would never have moved to the North Island, I wouldn’t have become second mother to my nieces, I likely wouldn’t have met my husband, bought my house, or met most of my friends. I’ve done so much living. MS is its own community and I’ve been lucky to meet friends from all over the world thanks to various Facebook groups. I do have my challenges, but I’m grateful for the experiences I’ve had, and the people I’ve met. Without them, I wouldn’t be who I am today.” 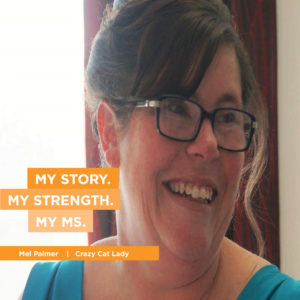