My name is Sarah Gardner, I have RRMS and was diagnosed 2 years ago after rupturing my Achilles whilst skiing and then having a bunch of neurological symptoms present over the following weeks.

Thankfully, because of how ‘dramatic’ my presentation was, I was admitted to hospital here in Auckland and went through appointments with Neurology, CT scans and MRI’s to rule out strokes, head injuries etc and came out with a diagnosis of MS instead.

I have always been active and sporty, being in the outdoors and being involved with sports and exercise is a large part of who I am, my social circle of friends, and brings me tremendous enjoyment. My biggest fear after being diagnosed with MS was that this would no longer be possible for me. I am also very independent and the thought that I would become a burden on family and friends was also terrifying.

Early after my diagnosis and during a period of soul-searching I came across this article written on the Lessons In Badassery blog.

Katie had written an article on Kat, a bad ass multi-sporter with MS based in Perth, WA (originally from Wellington though). Everything Kat talked about really resonated with me and was exactly what I was feeling and going through at that time. I was so moved by her words, that I messaged Kat on Instagram just to say thanks for sharing your story.

What would you know, but Kat replied and there began the start of a beautiful friendship. We are very much the same person and have very similar traits (Type A personality lol) so having a person who gets you and what you’re going through, plus loves the same things as you, has been the biggest blessing in changing my outlook on this disease and what my future will look like going forward. That’s not to say that the last two years has been an easy process, but I let myself be vulnerable, sought help from various professionals and have committed to making changes in my life so that I can keep being active and doing the things that I love to do! I have also been fortunate enough to meet a couple of other MS multisport athletes in NZ so now we have a little ‘epic’ squad (4 is the perfect number for a lot of team events too!!!)

Kat and I are mad keen mountain bikers and decided that we wanted to a) change the perception of what MS looks like and b) give some hope to others that MS is not a death sentence and doesn’t mean that you can’t keep doing the things that you love (you just may have to modify or change your approach to them).

In October of this year, Kat and I will be pairing up to ride the Cape 2 Cape, which is a 4 day mountain bike stage race set in the Margaret River area in Western Australia. We are doing this as a fundraiser for MS research. 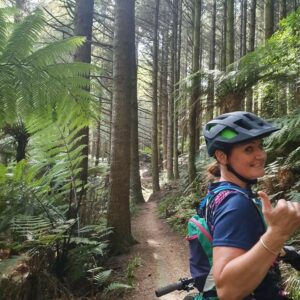