Jeremy Seed – MS, Mental Health, The NZ Army and Me

Anyone diagnosed with Multiple Sclerosis is in for a rough ride, says Captain Jeremy Seed, RNZAEC. 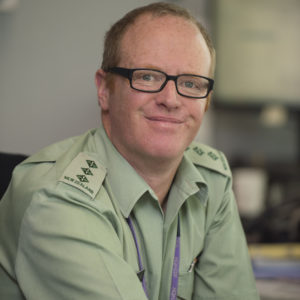 He lives with MS every day, and this is his story.

I am a Reservist Officer. In October 2009 I undertook a week long, short notice deployment as part of the humanitarian and disaster relief response mission to Samoa, following the devastating Tsunami.

Within days of my return, I noticed a sharp pain in my left eye and assumed it was debris. In 2011, after a myriad of tests I was diagnosed with Multiple Sclerosis (MS). MS is a neurological condition. It has no known cause or cure, and in New Zealand, MS occurs in around 1 in 1,000 people. MS causes the layer of fat that covers nerves and helps transmit instructions from the brain to the muscles to be stripped away, this means that all basic functions we all take for granted like walking or getting up from a chair, over time, become difficult. MS affects every single person diagnosed differently, so there is no standard prognosis.

I have been fortunate that while my leg functions and balance have been heavily impacted, my brain has remained unaffected.

The MS diagnosis, when it finally came, scared me. Surely I will be discharged from the Army? I thought. That sort of kneejerk reaction to neurological conditions is no longer the norm and personnel with neurological conditions were, and are, servicing across NZDF. I have received and continue to receive, sterling support and assistance from colleagues and supervisors from all three services.

Over the last few years, there have been some big developments with medication which does not restore lost body functionality but stops things getting worse.

In 2017, I removed all dairy and gluten from my diet which has made a big difference to how I have felt.

But the biggest impact of MS by far was on my mental health. Mental health has become something of a buzzword in the NZDF, and not before time. As is the nature of people, everyone responds differently to the situations they are placed in and exposed to. Some are not impacted by what they encounter and some are, but it’s not just what might happen on deployment that can affect  you, harm can be done much closer to home.

I am almost 50, and as I have aged and accumulated life experience, I know I have grown wiser. I was immature and unworldly as a young man (ask anyone who served with me in the 1990’s). I grew up, and wised up to life later than many of my peers, but I have also learned plenty along the way. A marriage collapsing, the death of a parent, depression, miscarriages, alcoholism and finally MS…..are all things I have confronted and dealt with in my life. One of the key things I have learnt along the way is that there is great truth in the old saying “that which does not kill us makes us stronger” and that accumulated experience comes in handy helping mates dealing with some of the same issues. A big thing to remember is to not be afraid to ask for help if you need it. The person you are asking may well have been there before you and knows exactly where you need to put your feet to get safely through, and perhaps more importantly, knows what and where to avoid.

MS very slowly stopped me doing things I loved, like running and staying physically fit and active. Initially, I didn’t want to adjust to it and slumped into a trough of self-pity and anger, which made me a miserable husband and father, but like a lot of self-absorbed or self-focussed behaviour, I couldn’t see it. Dire warnings about the need to ‘sort it out’ from my wife and the damage it was doing to my marriage, friendships and other relationships went unacknowledged. What snapped me out of it was seeing an old mate who I had served with many years previously who had a self-less attitude toward his own condition which woke me up and left me feeling ashamed to have been so self-indulgent for so long.

Rob Smith (RNZIR and NZIC) retired as a WO2 and was renowned for being frank and direct. I knew him when I was a LCPL and we always got on well. I had found him via Facebook and was aware he had Motor Neuron Disease. We had agreed to catch up over a brew when he came through Wellington and I was initially shocked when I saw him as he was almost completely paralysed. As soon as he began to talk, the same old character, humour and the same Wairau or spirit/soul, whatever you want to call it, emerged from his body. Rob was still Rob, he was just trapped in a body that had served him well, but couldn’t work anymore. Seeing how Rob could be so free of self-pity and accepting of his circumstances gave me a real wake up call and made me realise that I needed an attitude change.

I was still me, my body was failing, but that should not and would not define me.

It took me a few months to process, and while I had been miserable and self-obsessed for several years, my outlook has now improved to where it needs to be. Don’t get me wrong, I still have bad days but I am not defined by the MS or what it has done to my body, and that attitude shift means I can and do perform my roles as a husband, father and Army Officer without the anger and negativity that once accompanied my every waking moment.

Throughout the ups and downs, the Army has been a constant presence. I hung up my uniform in 1997 as a LCPL, and re-joined when I was commissioned in 2005. During my time ‘out’ I held a number of demanding roles in the public and private sector and had dealt with the aforementioned “milestone” events. Throughout, no matter how low I got or how bad I felt, I was always able to reach out to old Army mates who helped and really proved that a problem shared can be a problem halved. Since re-enlisting, I have loved being back; the people don’t change and make no mistake, they are wonderful people.

I was talking to a mate recently about MS. She didn’t know much about the condition and asked about the long term health effects and the ultimate prognosis. I replied that frankly it wasn’t great, but it would not kill me as it is not fatal. She described the outlook as sounding “grim” and she was right, like any life altering condition, it can sound grim when you first confront it. Her use of the word “grim” threw me, because I have been dealing with it for so long and now have a positive handle  on it. I have found the way around thinking like that, so to have my future cast as ‘grim’ was a little disconcerting!

No matter how ‘grim’ it may sound, or appear, you simply can’t dwell on that or indulge that line of thinking. It can take you to a very dark place….I know, I’ve been there and I don’t intend to go back.

This has been adapted from Jeremy’s original article, initially published in ARMY PEOPLE.