Meet some of our truly inspirational fantastic fundraisers.

“My name is Aileen Robinson and I’m 72 years old. I knew very little about multiple sclerosis until my sister Edna and niece Claire, who both live in England, were diagnosed. It is very difficult living so far away from family and not being able to help.

I’ve always done a lot of walking and when I retired I got into race walking and competitions. I’ve entered Wellington Around the Bays Half Marathon many times, the major spot prize was a trip to the London Marathon, which unfortunately I never won. But the idea was hatched that I’d like to do the London Marathon and to make it worthwhile I would also raise awareness and funds for Multiple Sclerosis NZ, my way of helping Edna and Claire.

The trouble was I wasn’t sure if the old body was up to it, so I did the Wellington Around the Bays Marathons in 2015 and 2016 to see how I’d go. Then in 2017 I would do the London Marathon. I trained 5 out of 7 days. My basic walk was 12 km, then slowly I built up my distances until I could cover the 42.2 km. I knew that I had to this training or I wouldn’t make it on the day.

Well I’m happy to say I walked the London Marathon on the 23rd April 2017 in 5 hours 29 minutes and the icing on the cake was that I more than doubled my fundraising target for MSNZ and made Edna and Claire very proud.” 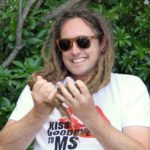 Wellingtonian Brett chose to ‘Cut or Keep’ for MS. Brett was inspired to Kiss Goodbye to MS by his wife
Catherine who was diagnosed with RRMS in 2014 and the work of MSNZ. On the 3rd December 2016 Brett let his friends, families and colleagues vote whether to ‘cut or keep’ his beloved 18 meters of dreadlocks with a donation. With a total of 89 votes – 22 to keep ‘em and 67 to cut ‘em, Brett was in for a mop chop! More than doubled his fundraising target and 800grams of hair lighter Brett was a new man, with a very happy wife. 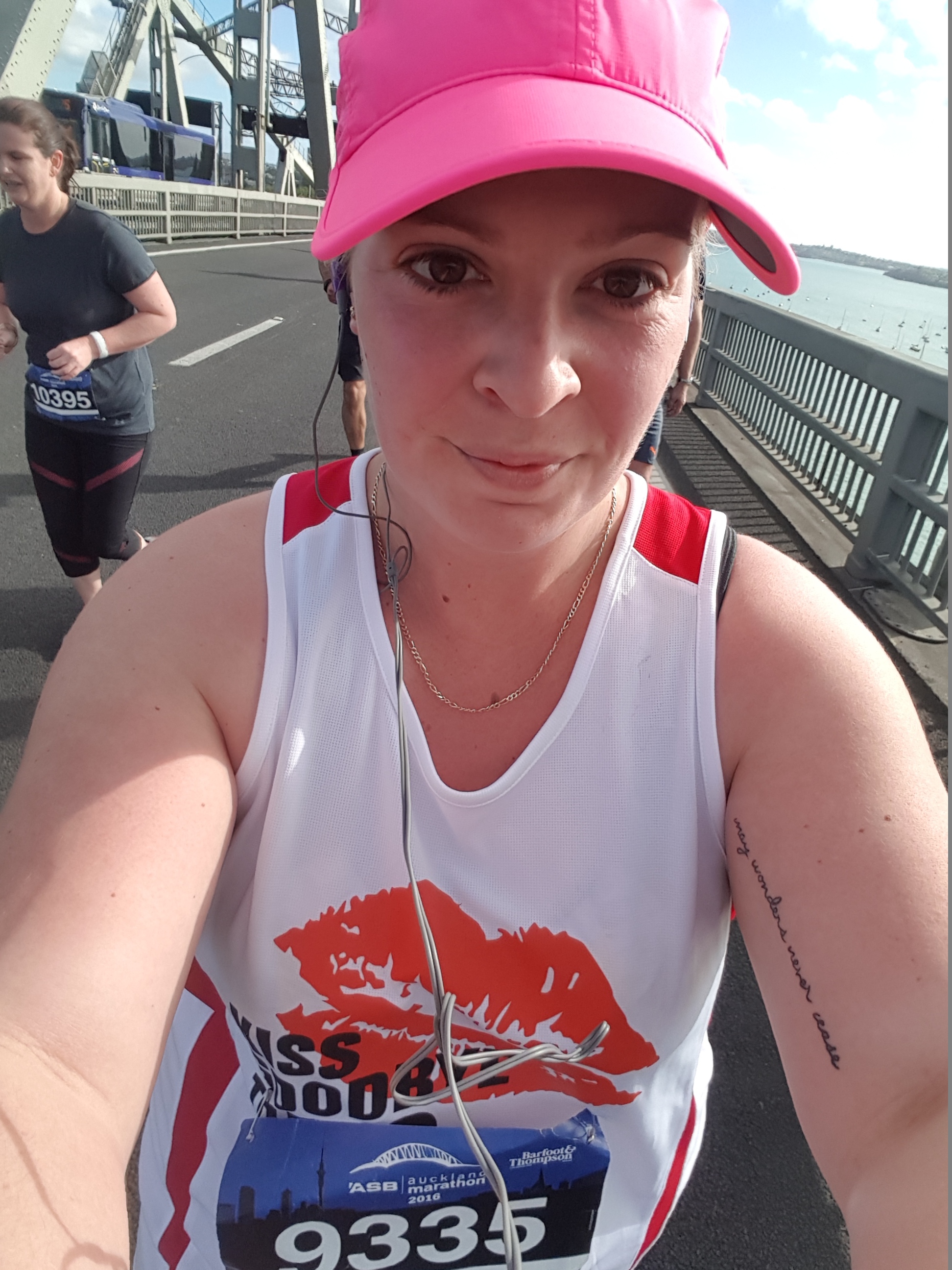 “Over the past two and a half years, since one of my nearest and dearest was diagnosed with MS, I’d been racking my mind thinking of ways I can help. Emotional and physical support come with the day-to-day life of being great friends but I always felt like I could do more.

A half marathon is something from my own personal bucket list but also a way I knew I could help by fundraising. Because I am far from a ‘runner’ this physically draining and tough mental challenge was my own way of trying to understand the discomfort PwMS live with. There were days I felt my legs would fall off!

As I walk through life with my best friend I am thankful for what MS has taught me. To be kinder, show patience, be more caring, open-minded, generous, to be thankful and most of all how important time is. Take a leap, don’t be scared of the outcome because everything will teach you a lesson for the better.
I never imagined I would reach my fundraising target of $5k, it was almost just a cheeky wish to start with but this truly proved to me the power of generosity, love and selflessness. There are so many people who I don’t know and may never know who helped me reach this.

On Sunday 30th October 2016 I achieved my goal of running a half marathon – 21.2km in 2 hours and 44 minutes. I was absolutely terrified as I started the run and the week leading up to the event I was incredibly nervous, had a lot of self doubt and honestly wasn’t sure if I’d be able to do it. But then I reminded myself of the strength and determination I see in my best friend … if she can be positive then why can’t I?

The event was amazing with stunning views and so rewarding. I hope next year I will return to raise more for MSNZ and better my time to under 2 hours 30 minutes.

To everyone who supported me or supports someone with MS, thank you!” 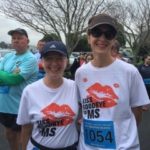 In October 2016 Julie Collier and her team of 21 supportive women took part in the New Plymouth Joggers and Walkers Club Half Marathon to raise funds and awareness for MS.

For Julie, who was diagnosed with MS in 2013, the challenge involved training for many months to walk the course and finishing the event was a goal in itself. “It’s very exciting. I just hope I can complete the course.” Never one to shy away from a challenge Julie who had already smashed her fundraising target was determined. “I did it six years ago in just under three hours, this year I would like to beat that time,” she said.

“I am one of the lucky ones, as my symptoms are relatively mild compared to some people. However, I am aware my circumstances could change at any time. I decided that I wanted to raise more awareness about MS as my experience showed that my knowledge, along with my family, and friends was very limited.”

exceed
Auckland-based IT distribution company exeed entered 30 staff in the Auckland Half Marathon on 30 October 2016. Exeed staff wanted to help in some way after the wife of a long-standing colleague, Account Manager Simon Bell-Booth, was diagnosed with MS in 2016.

“My wife and I are truly humbled by the support shown by exeed and its staff,” says Simon. “It is testament to the great people who work within this organisation.”

Exeed’s Managing Director Justin Tye says that the firm normally has five or six staff who enter the marathon each year, said he was amazed by the number of people inside the business that have signed up. “I’m really thrilled with the way the team have rallied around. The support for Simon and his wife is testimony to how much the team both appreciates the work that he does and wants to help the couple.” Justin himself entered and was really happy that members of his team are achieving increased fitness as a by-product of their fundraising dedication.

In September 2015 Felicity began her year-long challenge to run 12 races in 12 countries in 12 months, “a Sufferfest of epic proportions” as she put it. Felicity was inspired to fundraise for MSNZ from seeing the gradual decline of “one of the most loving, welcoming and inspirational” women she says she was fortunate to meet, her oldest and dearest friend’s mother, who had been diagnosed with MS for over 10 years. “Seeing first-hand the effects MS has had on her family and what she’s having to battle with every single day has really hit home. What is more than that is that I know she has a loving, supportive family and the means to get the help she needs. But the fact is that there are people out there with MS that don’t have the support and the means they need.”

In August 2016 Felicity ran her final race on home turf in NZ at the The Great Naseby Water Race, 50 miles (80km). The average race distance over the 12 events was 48km with 1750m of vertical ascent.

“It is a sobering thought that while I get the choice to push myself to the edge of exhaustion and beyond. People living with MS have to deal with that sort of fatigue each day and still have the courage to carry on.”