Many New Zealanders are turning to the ancient practice of Tai Chi, disovering the benefits of an exercise which is accessible to people of all ages and physical abilities. 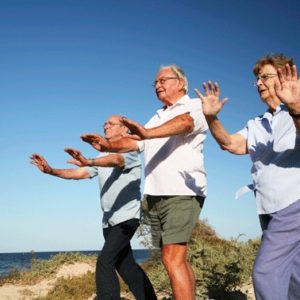 What is Tai Chi?

Tai Chi has been practiced in China for centuries as a martial art, as exercise and as a means of improving the flow of internal energy (chi) within the body.

Tai Chi emphasizes complete relaxation and is essentially a form of meditation, or, what has been called “meditation in motion.” Unlike other martial arts, Tai Chi is characterized by slow paced, gentle movements. Because the whole body moves as one, Tai Chi cultivates the link between mind and body, reducing stress and enhancing balance and co-ordination.

Tai Chi is based upon the concept of ‘chi’, a form of energy which exists in the human body and the universe as a whole. According to the philosophy of tai chi, this energy or chi is the life force of the body, but can become blocked, causing illness. The gentle breathing and relaxed movements of Tai Chi are designed to awaken and stimulate the flow of ‘chi’ and promote good health.

According to Chinese legend, a monk named Zhang San Fang founded the art of Tai Chi about eight hundred years ago, after observing the movements of a snake and a magpie in combat. The monk was impressed by the way in which the snake avoided the bird’s hostile approaches. From this, Zhang created a wondrous style of martial art that focused on the powerful and elegant movements of the snake. Tai Chi, as it is practiced in the west today, can perhaps best be thought of as a moving form of yoga and meditation combined.

Who can do it?

Because of its gentle nature, Tai Chi is accessible to people of all ages and physical abilities. Many people with mobility problems and ailments practice Tai Chi as therapy. Its gentle and supple movements promote good health and total wellbeing.

What are its Health Benefits?

Regular practice of Tai Chi can bring a wide range of health benefits. The flowing movements of Tai Chi serve as a moving meditation that reduces stress and provides a way to cultivate body and mind. Specific health benefits and effects include: