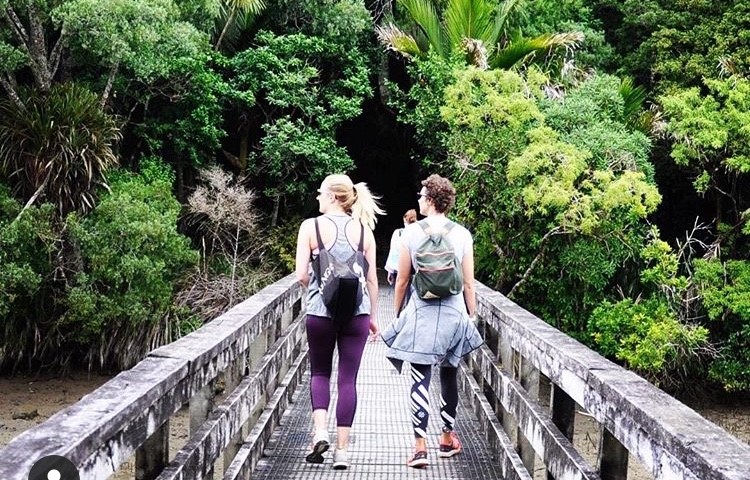 Sam and Rachelle Inspire Others To Get Outdoors

Despite a diagnosis of multiple sclerosis (MS), Aucklanders Sam Smith and Rachelle Becker will redefine what’s possible with MS and to inspire others to pursue healthier lifestyles. Supporting their aspirations, Mastering Mountains Charitable Trust with Multiple Sclerosis New Zealand (MSNZ) awarded grants to the pair, so that they can pursue outdoor adventures overseas.

Sam, a well-known comedian at TV3, was diagnosed with MS in 2015 and will walk 107km along King Ludwig’s Way in Bavaria, Germany. Rachelle who works in marketing was diagnosed in 2017 and will bike and hike across South-East Asia. As members of the Auckland MS Society, both plan to use their trips as a platform for inspiring others.

Before diagnosis, neither Sam nor Rachelle knew much about MS. “I didn’t really understand what MS was,” Rachelle comments.

Sam agrees and gives his perception of MS at the point of diagnosis: “I didn’t think people with MS could do [much outside]. I thought we stayed at home, took our medicine and then went for a stroll every now and again.”

Now Sam and Rachelle want to challenge how people view MS. “I’m excited to help educate people about MS and how it affects the human body,” Rachelle says. Sam is on a mission to “show people that a diagnosis doesn’t have to be a bad thing.”

Not that living with MS has been easy for Sam or Rachelle. Sam quit his job after his diagnosis, only one month after becoming a dad. “I woke up one morning, and I couldn’t see out of my left eye. At all. [And then] I lost the feeling in my hands, which meant I had to stop being a dentist.”

Rachelle’s diagnosis came at the same time her partner received alarming news of a brain tumour. “When I think back to that time, it’s a blur of putting on a brave face to make it through the day,” she says. “Teaching my girlfriend her A, B, C’s was never something I imaged I might have to do.”

“But I didn’t take my MS diagnosis lying down,” adds Rachelle, a self-described MS ninja. “And so far, I am kicking its butt.”

Despite the struggles, both Sam and Rachelle maintain a positive outlook.

After finishing dentistry, Sam pursued one of his passions. “I’m weirdly grateful for the diagnosis,” he explains. “Because of it, I got to start doing more comedy, and now I make a living through it.”

Rachelle believes MS has given her an appreciation for life. “Pre-2017, I knew that I should be grateful for every day that I have in this life, but now I actually feel it.”

Now a father of two, Sam feels motivated to accomplish his mission. “My two young boys are big balls of energy,” Sam says. “I want to run around with them without wanting to take a nap every 5 minutes. … This trip has really given me the impetus to train up, get active, get fit and take charge of this part of my life.”

For Rachelle, her upcoming cycling adventure is about regaining “the light and confidence that I had before I was diagnosed.” She also wants to redefine what MS looks like for her: “I want to prove to myself that I can achieve whatever I put my mind and body to.”

Getting outdoors has always been a part of Rachelle’s life. “Even when it’s a cold, dark winter morning I get up and go exercise, it’s like doing washing or paying bills – you’ve just got to do it.”

Rachelle’s goal is to “eat, pray, love, and bike” her way across South-East Asia. “Getting outside feels great, it’s good for you, the outdoors are so restorative,” Rachelle explains. “And vitamin D is where it’s at.”

Mastering Mountains Charitable Trust, with Multiple Sclerosis New Zealand, is proud to get behind Sam and Rachelle. The Trust offers Expedition Grants annually to help people with MS achieve inspiring adventures. Mastering Mountains thanks Macpac, MitoQ and World Expeditions for their generous support.