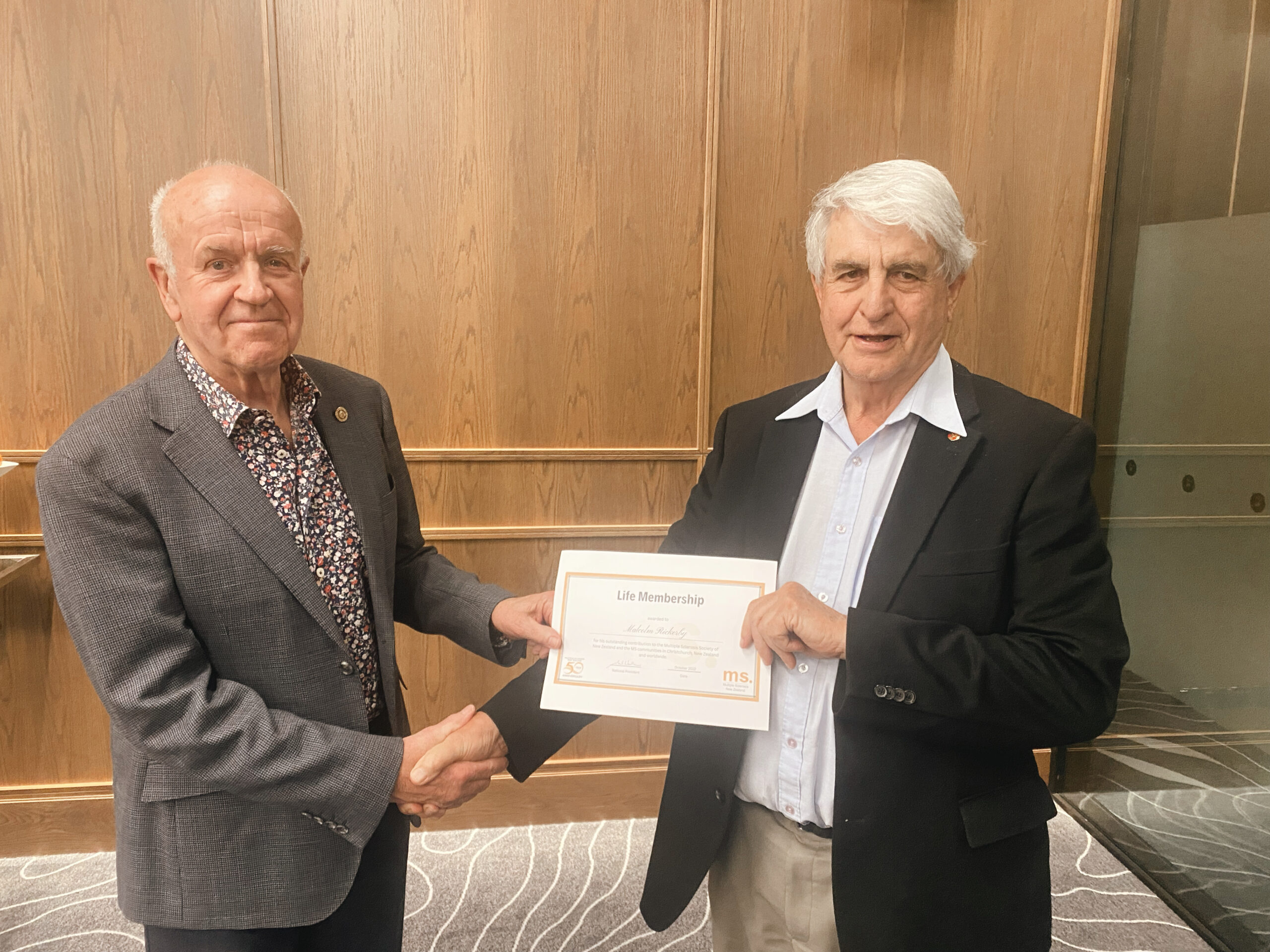 Malcolm Rickerby is what can only be described as the ultimate volunteer. The countless hours and passion he has dedicated to Multiple Sclerosis New Zealand since the 1970s has not been matched by any other in recent memory.

Malcolm has held several roles within the organisation over the years:

Malcolm initially became involved with Multiple Sclerosis organisations in the 1970s following his wife Jeanie’s diagnosis. Between 1980-81 he took on the role of Vice President. Due to his willingness to stand up and fight for what he believed in he sat as the Canterbury Representative on MSNZs National Council in 2003. In this role he soon made his mark as a sound and reasonable spokesperson but who would disagree where necessary. Malcolm’s priority has always been to improve services for people with MS whether in his region or nationwide.

The most significant impact Malcolm has made during his years involved with MSNZ has been in his role as National President. Malcolm took on the role in 2011 after seeing that the organisation was unsustainable financially. Leading the new National Executive Committee, he established that the office was untenable in its location in Wellington. He also encouraged the Committee to take more responsibility and be involved in the day-to-day management of the organisation.

Malcolm spearheaded the process of rebuilding the organisation. The initial decision was to move the organisation to Christchurch and place it under new management. Malcolm took responsibility for establishing and closely monitoring the budget. Malcolm was an almost daily presence ensuring the success and viability. Within 2 years, and without the organisation dropping any of its core functions, the organisation was able to achieve its budget and a small surplus, setting itself in good stead to further grow and develop its capabilities and capacities over the next 4 years.

Malcolm saw a key area of future sustainability beyond finances was the need to re-establish the somewhat fractured relationship MSNZ had developed over the years with its 18 affiliated independent Regional Societies. He emphasised the need to bringing the organisation as whole together with one core mission of supporting people with MS across New Zealand. MSNZ is now in a position where the National Office is looked to positively for support and guidance by regional committees and staff.

Malcolm is a visionary and is always looking forward to what MSNZ and the MS network can do to better provide services to people with MS. Malcolm has an innate sense of empathy which has enabled him to strive to ensure the organisation is supporting those less fortunate than he.

Malcolm has taken a prominent role in the advocacy work of MSNZ. Due to his personable nature he is key to developing relationships with government officials and other key stakeholders. Malcolm has ensured a consistent emphasis is put on providing an equitable and improved quality of care and service for people impacted by the effects of MS across the country.

In 2014 Malcolm was a part of the MSNZ Advocacy Team which was successful in lobbying to bring in two new treatments for Multiple Sclerosis patients. These were the first new treatments made available in NZ for over 10 years. He was also a key contributor to the second wave of advocacy for two further treatments in 2015. Since then he, alongside the other team members, have continued to push for improvements to the access criteria to MS treatments which are unnecessarily restrictive.

A supportive and encouraging leader

Malcolm has inspired the dedicated and loyal staff in the National Office by giving them the scope to use their skills and abilities and fostering a culture of support and innovation. Malcolm has encouraged the staff to always look to see what more they can do and how they can do better for the people that they service. Malcolm sees the value of encouraging and growing the skills of young women in the workforce employing Amanda as Multiple Sclerosis New Zealand’s youngest ever National Manager in 2012 to spearhead the organisation.

Malcolm has not only been an inspiration to those involved with MSNZ directly but in inspiring those connected with MS affiliated organisations around the country.

As President of Multiple Sclerosis New Zealand it is an honour to award Malcolm of behalf of the Society Honorary Life membership in recognition of this lifetime of exceptional commitment and service to this organisations – Neil Woodhams, MSNZ President.