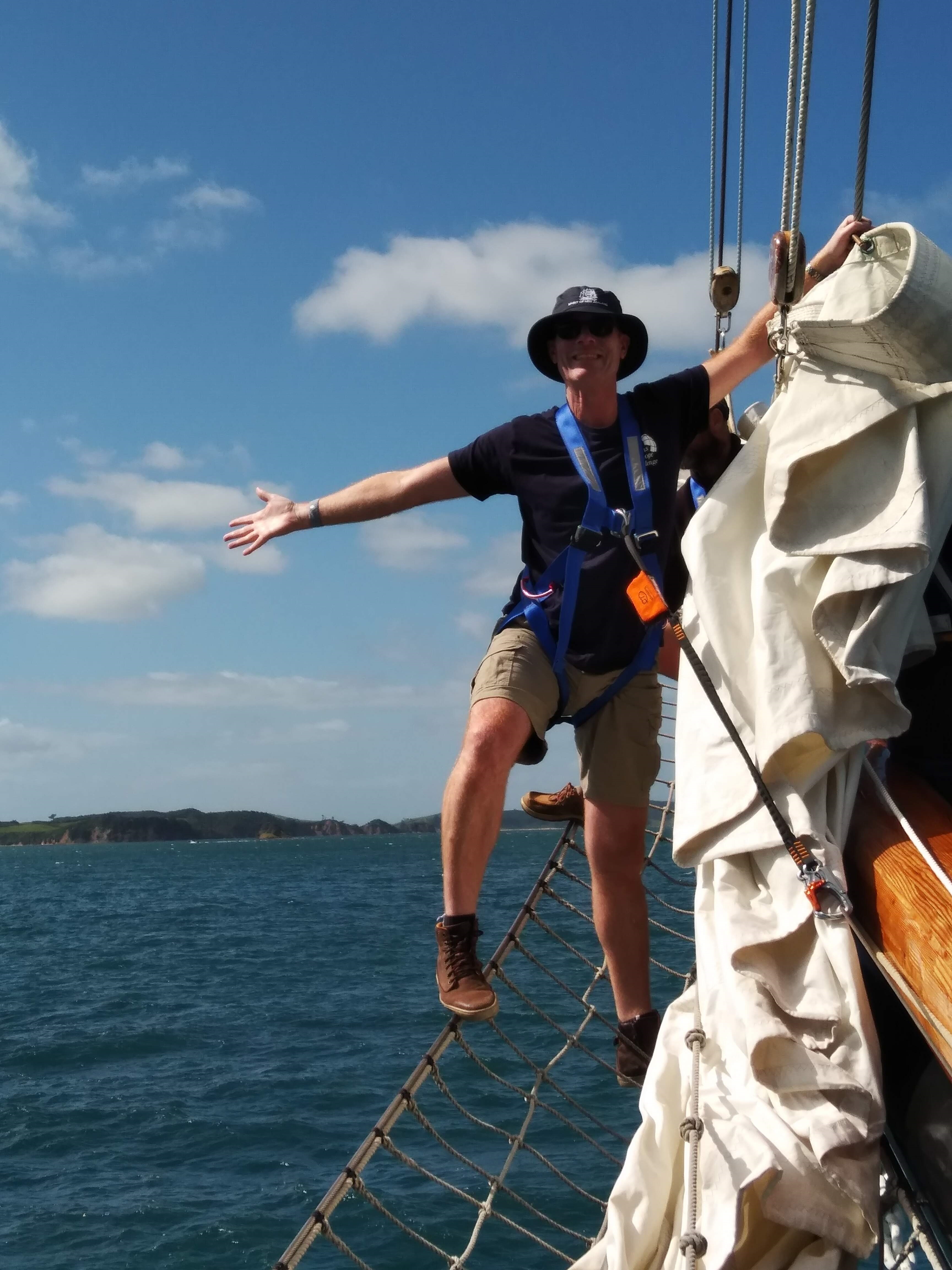 Thought for the day

In November 2018, Glenn Sparrow had the opportunity to sail on the Spirit of New Zealand tall ship on the Ocean of Hope Challenge. 40 people with Multiple Sclerosis from around the world spent 5 days together sailing around the beautiful Hauraki Gulf in New Zealand. On the final morning he had the honour of having the ‘thought of the day’.

“Over the last few days I have had jangling nerves, and my MS. I’ve seen dolphins, had sleepless nights on what is basically plumbing. There have been angry birds, and more than a few stares from the crew. False fire alarms, and coffee so strong you could paint the ship with it.

I have jumped off a perfectly good ship at an unholy hour. Five times. I’ve even had a really close look at the side of the ship which earned me more than one stare from the crew.

Funny story but it turns out all the earthquakes in Christchurch were fantastic training for this trip. The ground may move under you suddenly so always, always, always sit down to pee.

I have laughed, shed more than a few tears. I have seen looks of trepidation become looks of determination and then looks of triumph. And confronted some demons of my own.

When I first walked onboard I sent my wife a picture of the bunks with a message that I won’t repeat in public. Was I happy to be onboard? Hell no. Did I want to go home? Hell yes. Was I going to back down from this challenge? No.

Because that’s who we are. We don’t back down. We don’t take a back foot – even when it doesn’t work. We have got MS and we make damned sure MS does not have us.

On the first night we were all asked “What do you want from the challenge?” I replied that I was here to learn but I didn’t know what I would learn. The thing is I learnt something I didn’t expect. I learnt just how much stronger the people around me help me to be.

Today we raised the flag and rung the bell for the last time ending our journey as a crew. But it isn’t the end. When we all step off the ship we start a new part of our journey with MS. With new found confidence, self belief and more importantly with new friends. Friends that know what it is like to have MS. To understand the challenges we face and to give us a standing ovation when we overcome them.

Every morning we have had ‘fact of the day’. I’d like to finish with one of my own. Which I have since googled and found out it is made up.

The internet says that in Victorian times they used to transport manure on ships. After a number of explosions and lost ships they realised that when you pack it tightly and store it below decks science would take over. So they started writing Ship High in Transport on the bales. Over time that got shortened to S H I – you get the rest. MS should be shipped high in transport but not us. We are allowed below decks because we are not S H I T.

Thank you from the bottom of my heart to everyone who has made this challenge what it is. To the organisers for making it happen, the crew for always, always being there for us and for everyone who shared the journey with me. You have not only helped me learn how to live better with my MS but more importantly you have helped make me a better person.

The world-renowned boats, Steinlager II and Lion New Zealand will be taking to the water for the Oceans of Hope Challenge NZ on the 2nd – 6th December 2019 around the Hauraki Gulf, departing and returning to Auckland. For more information, costs and to receive an application form contact Ingrid on oceansofhopechallengenz@gmail.com.